Bangkok, known in Thai as Krung Thep (กรุงเทพฯ), or Krung Thep Maha Nakhon (กรุงเทพมหานคร, IPA: [kruŋtʰeːp mahaːnakʰon]), is the capital and largest city of Thailand, with an official 1990 population of 8,538,610. Bangkok is located on the east bank of the Chao Phraya River, near the Gulf of Thailand.

Bangkok is one of the fastest-growing, most economically dynamic cities in Southeast Asia. Local people like to think that it is emerging as a regional centre to rival Singapore  and Hong Kong,, but it suffers from major infrastructure and social problems as a result of its rapid growth. 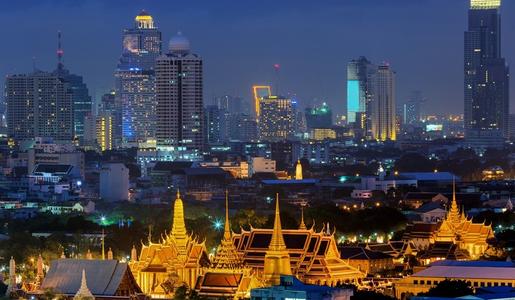 Bangkok is the economic center of Thailand. The Chao Phraya River allows Bangkok to function as a port. The Stock Exchange of Thailand is located in Bangkok. Tourism is a major source of revenue. Bangkok Chinatown is located on Yaowarat Road known as the gold shops street. The city contains many Buddhist temples (known in Thai as Wat), among the best known being Wat Pho, Wat Phra Kaeo, Wat Suthat, Wat Ratchanadda and Wat Arun. Khao San Road, near the Grand Palace complex, is a popular destination for young backpackers. The Loi Krathong festival of light is a popular time for tourists to visit with impressive fireworks displays along the river accompanied by many lit up boats parading up and down the river.

Bangkok's educational and cultural facilities include several universities, a fine arts academy, a national theater and a national museum.

Processed food, timber, and textiles are leading exports. Industrial plants include rice mills, cement factories, sawmills, oil refineries, and shipyards. The city is a famous jewelry center, buying and selling silver and bronzeware. Although technically illegal, prostitution is a fairly open in certain notorious parts of Bangkok, making the city a popular destination for sex tourism.

Administratively, Bangkok is one of two special administration areas in Thailand, (the other being Pattaya), in which citizens vote to choose their Governor, unlike in Thailand's 75 other provinces (changwat). In the last gubernatorial election in 2004 Apirak Kosayothin was elected Governor.

The urban sprawl of Greater Metropolitan Bangkok extends beyond the borders of Bangkok province, spilling into the neighbouring provinces of Nonthaburi, Samut Prakan, Pathum Thani, Nakhon Pathom and Samut Sakhon. The province as it is today was created in 1972 when the previous Bangkok province - changwat Phra Nakhon - merged with Thonburi province.

The seal of the city shows the god Indra riding in the clouds on Erawan, a mythological elephant-shaped creature (sometimes portrayed with three heads). In his hand Indra holds a lightning bolt, which is his weapon to drive away drought. The seal is based upon a painting done by Prince Naris. The tree symbol of Bangkok is Ficus benjamina.

An elaborate network of canals (khlong) gave the city the nickname "Venice of the East", at a time when all transportation was done by boat. Today almost all are filled in and converted into traffic-filled streets. However, many do still exist, with people living along them, and markets being conducted there as well. A notable one is the floating market in Taling Chan district.

Several elevated highways, and a partially-finished ring road around Greater Bangkok, have been built to overcome the jams.

In 1999 an elevated two-line 'Skytrain' (officially called BTS) metro system was opened. The first line of the underground Bangkok Metro opened to the public in July 2004. The remains of a failed elevated railroad project (the Hopewell project) can still be seen all the way from the main railroad station out towards the Don Muang airport - due to the Asian financial crisis the construction was halted and the concrete pillars were left unused. Locals call them "Hopehenge" or Stonehenge.

In July 2004, a new MRT subway system was launched connecting the northern train station of Bang Sue to the Hua Lamphong railway station near the city center, while going through the eastern part of the city. It connects to the BTS system at BTS Stations Mo Chit, Asok, and Sala Daeng.

Virtually all cities and provinces are easily reached by bus from Bangkok. For destinations in the southwest and the west, buses leave from the Southern Bus Terminal, west of the city. For destinations in the southeast, such as Pattaya and Ko Samet, buses leave from the Eastern Bus Terminal, at Ekkamai, the third-eastern-most stop on the Skytrain. For all destinations north and northeast, the Northern Bus Terminal at Mo Chit, which can be reached by both the Skytrain and Metro, is the place to start.The World Meteorological Organization has dubbed Bangkok the world's hottest city. It is also one of the world's most popular tourist destinations.

Bangkok began as a small trading center and port community, called Bang Makok ("place of olive plums"), serving Ayutthaya, which was the capital of Siam until it fell to Burma in 1767.  A new capital was then established at Thonburi (now part of Bangkok) on the west side of the river, before in 1782 King Rama I built his palace on the east bank and renamed his city Krung Thep, meaning the "City of Angels". The name Bangkok (บางกอก) now refers only to an old district on the Thonburi side of the river, but continues to be used to refer to the entire city by most foreigners.

The full ceremonial name of Krung Thep is กรุงเทพมหานคร อมรรัตนโกสินทร์ มหินทรายุธยามหาดิลก ภพนพรัตน์ ราชธานีบุรีรมย์ อุดมราชนิเวศน์ มหาสถาน อมรพิมาน อวตารสถิต สักกะทัตติยะ วิษณุกรรมประสิทธิ์, or Krung Thep Mahanakhon Amon Rattanakosin Mahinthara Ayuthaya Mahadilok Phop Noppharat Ratchathani Burirom Udomratchaniwet Mahasathan Amon Piman Awatan Sathit Sakkathattiya Witsanukam Prasit, which means "The city of angels, the great city, the eternal jewel city, the impregnable city of God Indra, the grand capital of the world endowed with nine precious gems, the happy city, abounding in an enormous Royal Palace that resembles the heavenly abode where reigns the reincarnated god, a city given by Indra and built by Vishnukarn." Local schoolchildren are taught the full name, although few can explain its meaning because many of the words are archaic. Most Thais who do recall the full name do so as it was used in a popular song (กรุงเทพมหานคร/Krung Thep Mahanakhon by อัสนี-วสันต์ โชติกุล/Asanee-Wasan Chotikul 1989 and will often recount it by recalling the song at the same time, much in the same way that English speakers sing the alphabet song while reciting the English alphabet.

Bangkok International Airport, commonly called "Don Muang", the busiest in South-East Asia, is located north of the city, now already enclosed by urban areas. Construction for the new Suvarnabhumi Airport (pronounce Suwannaphum), in the Bang Phli district of Samut Prakan Province to the south-east of the city started in 2002, it is scheduled to be opened in 2006. Once the new airport is completed, all international traffic is expected to go there and Don Muang will be used for domestic flights only. There is also a railway station at Don Muang for destinations to the north and northeast.

Air pollution is a major problem in Bangkok, blamed on the city's massive traffic jams. The recent construction of elevated second-level expressways and the Bangkok Mass Transit System's (BTS) SkyTrains have eased the problem a little.

The sale of illegally copied copyright material (mostly software and DVD movies) is widespread in Bangkok. One of the most popular locations in Bangkok for purchasing pirated software is Pantip Plaza. Although many attempts have been made at cracking down on illegal copying by raiding Pantip and other venues over the years, these have been ineffective and illegal copying of copyrighted material is still a booming business. The BSA, an American software copying prevention group believes that it could extract 80 million USD from Thailand if all of illegally copied software there was stopped. Due to heavy, long term pressure from groups such as the BSA and the Recording Industry Association of America, which threatened difficulties for trade agreements for Thailand, the Thai government has now started to crack down heavily on the unauthorised copying by its citizens including the introduction of "one of the most aggressive legislative schemes for the protection of intellectual property rights in any developing nation". However, these measures have not yet halted the appetite of Thai citizens for unauthorised copies, the sale of unauthorised discs continues and the raids have been called "half-hearted". The BSA states, however, that reduction of illegal copying is a long term goal and that the aim now is more to re-educate the Thais towards the BSA's own views.