The city grew quickly, mostly due to bars and other nightlife aimed at the GIs. When the Americans left following the end of the Vietnam War, the city fell into a crisis. However, the rise of mass tourism from Europe brought new life to Pattaya.

Despite its reputation as being largely a destination for sex tourism, Pattaya has seen a large increase in family tourism in recent years, thanks to efforts to present a more wholesome image. Families now also makes up a large part Pattaya's tourism industry. Pattaya is an especially popular vacation destination for families from Russia, Eastern Europe and Scandinavia. Pattaya also has a large international expatriate population, due to the low cost of living as well as the significant western infrastructure, which includes modern hospitals, shopping malls, supermarkets and fast food outlets.

The rapid growth of sex tourism brought about many negative consequences, such as petty crimes and prostitution. These problems seemed to be out of the central governments's ability to handle. In 1976, the Pattaya City Act was passed by the Thai legislature, making Pattaya a self-administrating municipality governed by a Council-manager government. However, many argue that this administration system has some drawbacks (for example, the mayor disagreeing with the city manager), and critics have recommended abolishing the system.

Pattaya's main attraction is its beaches. Pattaya Beach is situated along the central city in close proximity to shopping, hotels and bars. The over-abundance of jet-skis and speedboats has contributed towards the pollution of the water along Pattaya Beach. The section of beach from Central Road (Pattaya Klang) south to the harbor is directly adjacent to the core of Pattaya's abundant nightlife area. Therefore, it is less family-oriented than North Pattaya, Naklua and Jomtien Beach.

Jomtien Beach is divided off from the main part of Pattaya by Buddha Hill, just south of the city. In contrast to Pattaya Beach, Jomtien is a popular spot for family vacationers and watersports enthusiasts. Jomtien is essentially a residential area with beach side hotels, bungalow complexes, condominiums and restaurants. A wide array of watersport activities can be found, including jet-skis, para-sailing and scuba diving. Jomtien is also home to Pattaya Park, an entertainment complex with a waterpark, roller coaster, monorail and children's activities. The 56-story Pattaya Park tower is a Pattaya landmark and can be seen from virtually anywhere in the city.

Ko Lan is a small island situated 7.5 km west Pattaya. Ko Lan is accessible by speedboat and ferry. The ferry departs every few hours, and is a 45-minute ride costing just 20 Baht each way. Speedboats are more expensive, but can reach the island in less than 15 minutes. Ko Lan has several beaches, which are known for their cleanliness, relaxing atmosphere, soft white sand and crystal-clear water.

Other activities include golfing at one of the area's many golf courses, go-cart racing, visiting the construction site of an elaborate private wooden temple known as Sanctuary of Truth, and different theme parks and zoos such as Mini Siam, and Elephant Village. The Sri Racha Tiger Zoo features several hundred tigers and thousands of alligators as well as some other animals; it has often been criticized for the animals' living conditions. A worker was killed by a tiger in 2004  and the zoo saw a major outbreak of the bird flu among the tigers later in the same year.

Pattaya is renowned for its nightlife, much of which revolves around its massive sex oriented industry. Hundreds of beer bars, go go bars, restaurants and clubs line the busy streets, and are bustling with activity 365 days a year. Boyztown is Pattaya's most notorious area, consisting of gay go-go clubs and bars which draw homosexual men from all over the world.

Pattaya is renowned for its nightlife, much of which revolves around its massive sex oriented industry. Hundreds of beer bars, go go bars, restaurants and clubs line the busy streets, and are bustling with activity 365 days a year. Boyztown is Pattaya's most notorious area, consisting of gay go-go clubs and bars which draw homosexual men from all over the world.

Muay Thai (Thai Boxing) matches aimed at the tourists can be seen from many of the open-air beer bars along Beach Road and the highly popular Walking Street, which is beside Boyztown.

Pattaya is known for its cabaret revues featuring kathoeys (male-to-female transsexuals), with Alcazar and Tiffanys being the largest and most elaborate.

Pattaya enjoys a tropical wet and dry climate, which is divided into the following seasons: Warm and Dry (November to February), Hot and Humid (March to May), and Hot and Rainy (June to October). The most comfortable time of year coinsides with the peak tourist season, which is on and around Christmas and New Year.

Petty crimes such as picking pockets are a known problem in and around the major tourist areas, such as Jomtien Beach and Pattaya Beach. To help curb this problem, a special Tourist Police division was established to aid foreign tourists (farangs) who have been scammed or robbed.

Other crimes are mainly drinking-related offences such as fist fights, which generally occur between foreign tourists.

In 1996, a six-member gang was arrested for repeatedly robbing tourists who had been slipped drugs by prostitutes they had hired. Some of the tourists died. The police investigated nearly 150 suspicious deaths of male tourists that had occurred in Pattaya hotels between the years 1994 to 1996.

For several years, Pattaya has served as a hideway for foreigners with connections to organized crime, and dozens have been murdered in gang-related disputes.

The authorities are increasingly cracking down on paedophiles who formerly flocked to Boyztown, and a number of high profile arrests of wanted sexual predators have been made in recent years.

Pattaya, along with the rest of Thailand, is known for its abundance of pirated DVD Movies, Music CDs and Software. Such vendors can be found anywhere along main tourist areas, having their own booths or simply approaching customers in bars, beaches and restaurants.

Rayong province (Thai spelling ระยอง) is a province (changwat) of Thailand. Neighboring provinces are (from west clockwise) Chon Buri and Chanthaburi. To the south is the Gulf of Thailand.

It is still remembered by the local people that King Taksin (of Thailand) came to Rayong after the fall of Ayutthaya. During a short stay in Rayong he built a navy, and then went on to Chantaburi to collect his arms to fight back the Burmese. In the city of Rayong is a shrine at which local people pay respects to Taksin.

The north of the province is covered by hilly landscape, but most part is low coastal plains. Several islands in the Gulf of Thailand belong to the province, including the two very touristic Ko Samet and Ko Mun.

The province is subdivided in 6 districts (Amphoe) and two minor districts (King Amphoe). These are further subdivided into 58 communes (tambon) and 388 villages (mubaan).

Pattaya (Thai พัทยา Pattaya)  located on the east coast of the Gulf of Thailand, about 165 km southeast of Bangkok in the province of Chon Buri. The real population of Pattaya is probably closer to 500,000. The discrepancy results from a complicated procedure in which most Thais remain registered in their hometown, where they are still counted even though they have relocated. Pattaya is one of the largest centers of tourism in Thailand. Pattaya was simply a small fishing village until the rich of Bangkok discovered it as a beach resort in the 1960s. Soon thereafter, American servicemen from the U. S. Air Force base at Utapao in Rayong province began using the area for "rest and recreation" (R&R). 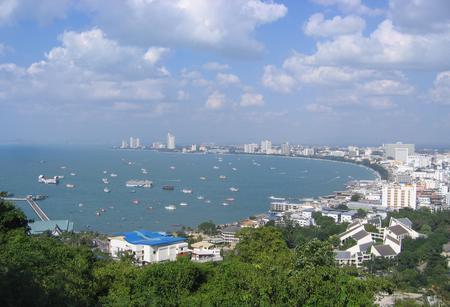