Thailand is home to several distinct geographic regions, partly corresponding to the provincial groups. The north of the country is mountainous, with the highest point being Doi Inthanon at 2,576 m. The northeast consists of the Khorat Plateau, bordered to the east by the Mekong river. The centre of the country is dominated by the predominantly flat Chao Phraya river valley, which runs into the Gulf of Thailand. The south consists of the narrow Kra Isthmus that widens into the Malay Peninsula.

The local climate is tropical and characterised by monsoons. There is a rainy, warm, and cloudy southwest monsoon from mid-May to September, as well as a dry, cool northeast monsoon from November to mid-March. The southern isthmus is always hot and humid. Major cities beside the capital Bangkok include Nakhon Ratchasima, Udon Thani, Nakhon Sawan, Chiang Mai,  Surat Thani, Phuket and Hat Yai Songkhla.

After enjoying the world's highest growth rate from 1985 to 1995 - averaging almost 9% annually - increased pressure on Thailand's currency, the baht, in 1997 led to a crisis that uncovered financial sector weaknesses and forced the government to float the currency. Long pegged at 25 to the US dollar, the baht reached its lowest point of 56 to the US dollar in January 1998 and the economy contracted by 10.2% that same year. The collapse prompted a wider Asian financial crisis.

Thailand entered a recovery stage in 1999, expanding 4.2% and grew 4.4% in 2000, largely due to strong exports - which increased about 20% in 2000. Growth was dampened by softening of global economy in 2001, but picked up in the subsequent years due to strong growth in China and the various domestic stimulation programs of Prime Minister Thaksin Shinawatra, popularly known as Thaksinomics. Growth in 2003 and 2004 was over 6% annually.

Substantial industries include electric appliances, components, computer parts and automobiles, while tourism contributes about 5 % of the Thai economy's GDP.

Thailand's population is dominated by ethnic Thai and Lao, the latter concentrated in the northeastern Isan region and making up around one third of the population. There is also a large community of Thai Chinese, who have historically played a disproportionately significant role in the economy. Bangkok's Chinatown is located on Yaowarat Road. Other ethnic groups include Malays in the south, Mon  Khmer and various indigenous hill tribes.  After the end of the Vietnam War,  many Vietnamese refugees settled in Thailand, mainly in the eastern regions.

According to the last census (2000) 94.6% of Thais are Buddhists of the Theravada tradition. Muslims are the second religious group in Thailand at 4.6%. Most of them are ethnic Malays and they are mostly concentrated in the south, where they form a strong majority in four provinces. Christians,  mainly Catholics, represent 0.75% of the population. A tiny but influential community of Sikhs and some Hindus also live in the country's cities. The Thai language is Thailand's national language, written in its own alphabet, but many ethnic and regional dialects exist as well as areas where people speak predominantly Isan or Khmer,  Although English is widely taught in schools, proficiency is low.

Muay Thai, or Thai boxing, is the national sport in Thailand and its native martial art. It reached popularity all over the world in the 1990s. Similar martial art styles exist in other southeast Asian countries.

The standard greeting in Thailand is a prayer-like gesture called the wai. Taboos include touching someone's head or pointing with the feet, as the head is considered the highest and the foot the lowest part of the body. Stepping over someone, or over food, is considered insulting. Books and other documents are considered the most revered of secular objects - therefore one should not slide a book across a table or place it on the floor.

Thailand is a constitutional monarchy and the King is extremely respected and revered. It is illegal to insult the Royal Family.

A unified Thai kingdom was established in the mid-14th century. Known as Siam until 1939, Thailand is the only Southeast Asian country never to have been taken over by a European power. A bloodless revolution in 1932 led to a constitutional monarchy. In alliance with Japan during World War II, Thailand became a US ally following the conflict. Thailand is currently facing armed violence in its three Muslim-majority southernmost provinces.

Thailand has a well developed infrastructure, a free-enterprise economy, and welcomes foreign investment. Thailand has fully recovered from the 1997-98 Asian Financial Crisis and was one of East Asia's best performers in 2002-04. Increased consumption and investment spending and strong export growth pushed GDP growth up to 6.9% in 2003 and 6.1% in 2004 despite a sluggish global economy. The highly popular government's expansionist policy, including major support of village economic development, has raised concerns about fiscal discipline and the health of financial institutions. Bangkok has pursued preferential trade agreements with a variety of partners in an effort to boost exports and maintain high growth, and in 2004 began negotiations on a Free Trade Agreement with the US. In late December 2004, a major tsunami took 8,500 lives in Thailand and caused massive destruction of property in the southern provinces of Krabi, Phangnga, and Phuket. 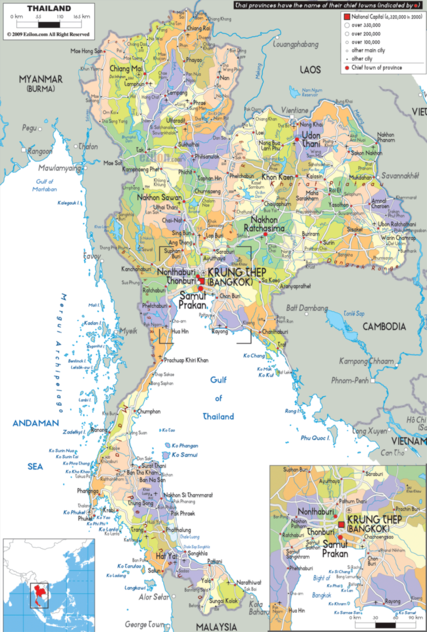